INDICATOR 1: IMPROVEMENT OF FOREST GOVERNANCE THROUGH THE STRENGTHENING OF INSTITUTIONS AND POLICIES

• Many countries have made some progress in strengthening their institutions and policies in the forest sector (Hoare 2015).

• The governance frameworks across five timber producing countries (Brazil, Cameroon, Ghana, Indonesia and Malaysia), measured in policy scores by Chatham House, have, on average, made overall progress between 2008 and 2013, though levels of improvement vary substantially between countries.

INDICATOR 2: EXTENSION AND STRENGTHENING THE RULE OF LAW, AS INDICATED BY ILLEGAL LOGGING AS A PERCENTAGE OF TOTAL LOGGING, THE QUANTITY OF IMPORTS OF TIMBER WITH HIGH RISKS OF ILLEGALITY, AND THE NUMBER OF KILLINGS RELATED TO LAND DISPUTES

• According to Chatham House, the level of imports of wood-based products at high risk of illegality has remained relatively constant after experiencing a decrease in years prior to 2008 (Hoare 2015). For Chatham House this mirrors the slow pace of governance reforms, the growth of informal small-scale production in many tropical countries and the substantial increase in forest conversion, much of which is illegal.• Overall, the proportion of (likely) illegal imports remained relatively stable between 2000 and 2013. However, trends are not encouraging. There is more notable change in absolute numbers, with levels of (likely) illegal imports up to 60 million m3 in 2013 from 46 million m3 in 2000. The large majority of this increase is accounted for by illegal imports into China and to a lesservextent, India and Vietnam, while (likely) illegal imports into a number of developed countries such as the USA and Japan decreased.

• From 2010 to 2014 a total of 523 persons were recorded as murdered in cases with a clear and documented link to a forest or land issue. Though the numbers vary significantly from year to year, making it difficult to establish a clear upward or downward trend, indicative data shows an overall upward trend and, at the very least, little sign that the problem is being successfully addressed.

• The majority of killings documented were linked to disputes over who holds rights to land or forest and indicative evidence shows that many arise out of indigenous peoples and other local communities seeking to assert or protect their rights.

• The share of the proportion of total forests over which indigenous people and local communities (IPLCs) have recognized rights increased 38% over the period 2002-2013. The vast majority of forest lands with rights recognized for IPLCs are in low and middle income countries, where such rights exist over 30.1% of forest land. While this share has increased from 21.2% in 2002, the rate of recognition has slowed dramatically since 2008, with 2008-2013 seeing recognition of less than half the area recognized in 2002-2008. 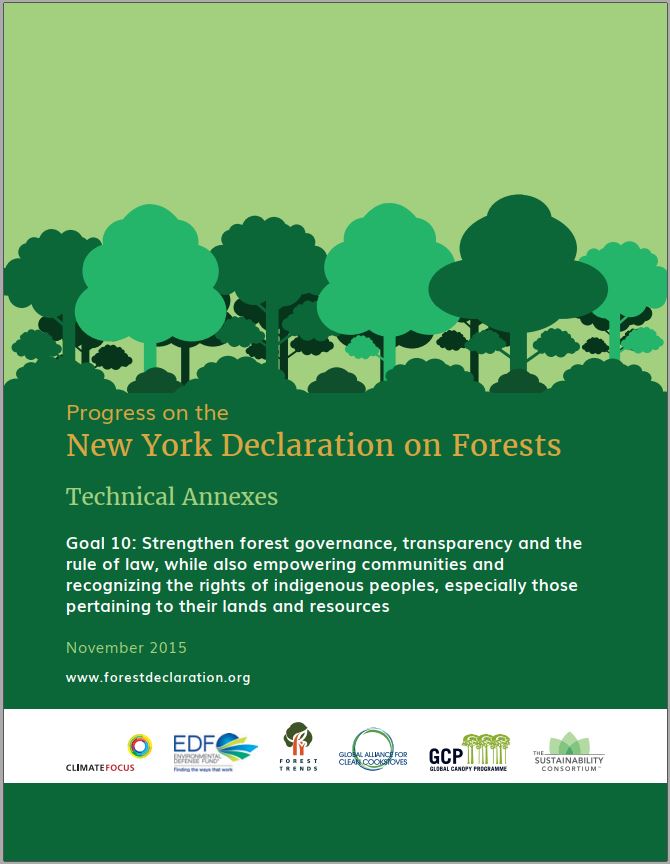