• Globally, the annual net loss of natural forest area appears to be declining (a 25% decrease in 2015 compared with a 2000–10 baseline). However, there is no sign that the annual gross rate at which trees are being cleared or harvested is slowing (a 9% increase in 2011–14 compared with a 2001–10 baseline). This indicates that while there may be a significant increase in global regeneration, restoration, and reforestation, tropical forest clearing continues to grow (Figure 1).

• For the period 2001-13, deforestation emissions reached an annual average of 2,270 million metric tons of Carbon Dioxide (MtCO2), which makes deforestation a larger source of emission than Russia’s economy-wide emissions in 2012.

GOAL 2: Support and help meet the private-sector goal of eliminating deforestation from the production of agricultural commodities such as palm oil, soy, paper, and beef products by no later than 2020, recognizing that many companies have even more ambitious targets

• Deforestation-related pledges have continued to grow since the NYDF was signed in 2014, with the number of companies making commitments increasing to 415 from 307 since last year’s report. The majority of commitments address palm oil (59%) and wood products (53%). Soy and cattle are covered by significantly fewer commitments (21% and 12%, respectively), which is a matter of concern, considering their relevance as major deforestation drivers.

• Some progress has been made toward implementing corporate commitments to removing deforestation from agricultural commodity supply chains, with companies making headway in adopting policies to reduce their exposure to deforestation. But many companies with deforestation-related commitments continue to lack time-bound, actionable plans for how these commitments will be implemented, and the majority of companies do not publicly report on compliance with their own forest policies, making independent verification of progress difficult.

• Weak forest governance presents a major barrier to private-sector efforts. Although companies see limited or no overall global improvement in forest governance and public-sector support, they highlight specific incidents of improved collaboration and listed examples of successful public-private cooperation. There is a recognized need for collaborative and integrated approaches that result in an increased momentum behind programs that link landscape-level public programs paired with private-sector sourcing commitments.

GOAL 3: Significantly reduce deforestation derived from other economic sectors by 2020

• After agriculture, timber extraction, mining, infrastructure development, and human settlements are the most important activities driving the loss of tropical forests.

• However, a number of studies look at the deforestation of other economic activities and several industry initiatives are under development. We expect that these developments will start filling the data gaps in coming years.

GOAL 4: Support alternatives to deforestation driven by basic needs (such as subsistence farming and reliance on fuel wood for energy) in ways that alleviate poverty and promote sustainable and equitable development

• In the absence of data on interventions to tackle subsistence agriculture as a driver of forest loss, we have to focus our assessment on evaluating the reduction of use of fuel wood, for which limited data are available.

• There has been a steady increase in the global distribution of clean cookstoves in the past year, with nearly 20 million new cookstoves and fuels distributed in 2014. Of those, 12.1 million met the Global Alliance for Clean Cookstove’s definition of clean and/or efficient. Financing for cookstove interventions remains flat.

GOAL 5: Restore 150 million hectares of degraded landscapes and forestlands by 2020 and significantly increase the rate of global restoration thereafter, which would restore at least an additional 200 million hectares by 2030

• There has been a significant increase in new pledges committing to restore forests, bringing us closer to the goal of 150 million hectares by 2020:

• Since early 2015, some 114 parties to the UNFCCC have submitted intended NDCs containing land sector targets. The cumulative restoration and afforestation pledges are estimated to amount to 161.6 million hectares—equal to 46% of the 350 million hectare 2030 restoration target set by the NYDF.

GOAL 7: Agree in 2015 to reduce emissions from deforestation and forest degradation as part of a post-2020 global climate agreement, in accordance with internationally agreed rules and consistent with the goal of not exceeding 2°C warming

• The text of the Paris Agreement anchors action on land use, including REDD+, within the overall mitigation framework of the agreement, providing a long-term signal that clarifies the central role of forests in climate change mitigation efforts.

GOAL 8: Provide support for the development and implementation of strategies to reduce forest emissions

GOAL 9: Reward countries and jurisdictions that, by taking action, reduce forest emissions—particularly through public policies to scale up payments for verified emissions reductions and private-sector sourcing of commodities

• At the Paris Climate Summit, Germany, Norway, Germany, Norway and the United Kingdom announced a collective aim to provide over US$5 billion from 2015 to 2020, if forest countries demonstrate measured, reported and verified emission reductions.

• Since 2014, pledges and commitments for results-based finance for forest emissions reductions have grown by more than US$6.4 billion. Disbursements continue to lag behind, amounting to just US$440 million, as many countries are still in the process of preparing large-scale REDD+ programs in line with donor requirements. Norway’s International Climate and Forest Initiative is responsible for the majority of bilateral commitments and disbursements.

GOAL 10: Strengthen forest governance, transparency, and the rule of law, while also empowering communities and recognizing the rights of indigenous peoples, especially those pertaining to their lands and resources

• New data on killings of land and environment defenders show 2015 was the worst year on record, with 181 killings recorded—an average of 3 every week.

• While implementation of many Voluntary Partnership Agreements agreed under the Forest Law Enforcement Governance and Trade (FLEGT) Action Plan of the European Union (EU) continues to face hurdles, Indonesia looks set to be the first country to issue FLEGT licenses for exporting to the EU at the end of 2016. 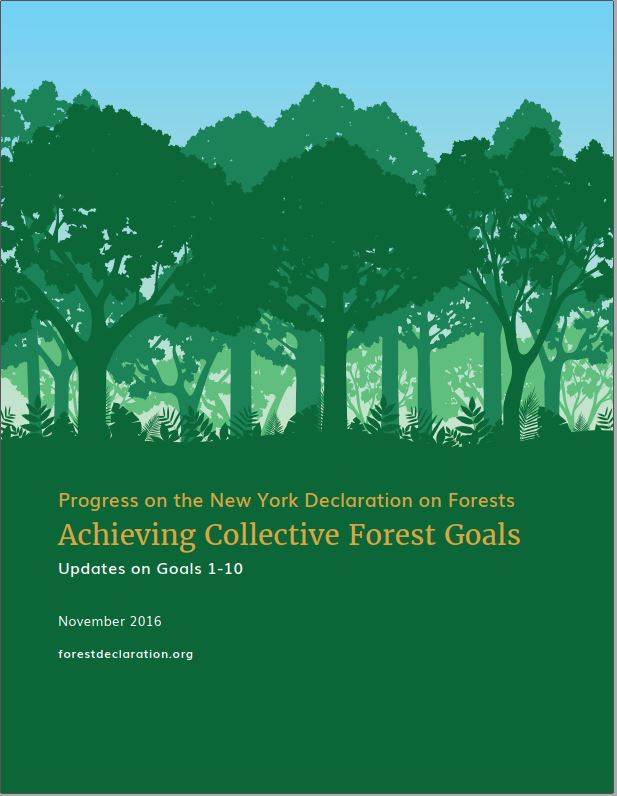