Driven by the shared understanding that halting deforestation is essential to keep temperature increases below 2 degrees Celsius above pre-industrial levels, the endorsers adopted an ambitious declaration detailing ten goals. By committing to the ten goals of the declaration, endorsers have agreed to work toward halving tropical deforestation by 2020 and ending it by 2030. The NYDF also calls for the restoration of 150 million hectares of degraded landscapes and forestlands by 2020 and 350 million hectares by 2030.

Five years later, there is little evidence that these goals are on track, and achieving the 2020 NYDF targets is likely impossible.

The 2020 NYDF Assessment Report takes a stark look at trends across all ten goals of the NYDF and find progress to be wanting.

This report was supported by the Climate and Land Use Alliance (CLUA), the Good Energies Foundation, and the International Climate Initiative (IKI) of the German Federal Ministry for the Environment, Nature Conservation and Nuclear Safety (BMU) on the basis of a decision adopted by the German Bundestag via the NYDF Global Platform. 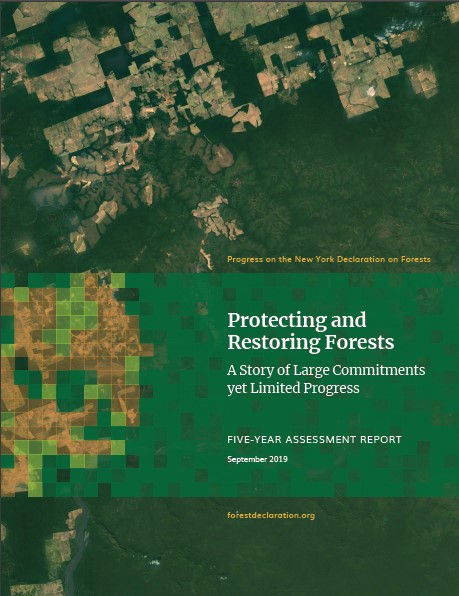 📣 "Carbon market proposals for partnering with Indigenous Peoples must begin with respect of their land rights and #DeepRoots. ☝️That is the only guarantee that forests will remain standing".

#COP27 brought us together for implementation, but we came out with more commitments. Indigenous and local communities are expecting to see them on the ground. Let world leaders know that we will be watching by retweeting this post #GuardiansOfTomorrow.